The iQFOiL International Games, formerly known as 2020 iQFOiL World Championships, just ended a week ago and is time to look back at the organization of this event made possible by the collaboration with the near Sailing Club of Salò: Società Canottieri Garda Salò.

This event has been a massive effort for all the stakeholders. Several peculiarities of the event were really challenging and the global pandemic emergency around the corner was obviously keeping the alert very high increasing the overall effort to the edge.

First of all, iQFOiL is a real new class. When in February 2020 a common friend put me in contact with the iQFOiL class manager Gonzalo Costa Hoevel, the iQFOiL board was just selected in Bermuda as the new windsurf board for the Olympics in Paris 2024.

With a lot of excitement and energy, the IWA team has created a full set of documents and people to support the first round of clinics, try out sessions and of course regattas.

For many reasons, new classes tend to pick the Lake Garda for their first World Championship and the iQFOiL class had the same idea. But on Lake Garda, there are few clubs able to manage the numbers and the complexity of a newly born Olympic class.

After a short run of consultation, the class picked Univela Sailing in Campione del Garda as the venue for the first-ever iQFOiL World Championship. Univela is the youngest of the top clubs in the North Lake Garda and has a strong reputation for great innovation and high-performance sailing events. Foiling fanatics are always around Campione del Garda and just to mention the last major event: Univela hosted the Formula Kite Worlds in 2019, the new foiling kite selected for the Olympics in Paris 2024.

One Class - Two Kind of Windsurfers

The energy and passion of the new class were second only to the unpredictability of the number of participants. Firstly because many teams were still busy with the Olympics in Tokyo using the RS:X. Secondly because of the production time necessary to provide all the countries in the world with enough boards, foils and sails in order to train and get ready for top-level competition. Starboard has a major experience in the market but the demand of the new iQFOiL has been enormous and production was running full speed.

Another level of uncertainty related to the new class was the kind of windsurfers it was attracting. On one side the structured high level trained RS:X sailors that are already looking after Tokyo 2020. On the other hand the professional sponsored super motivated and independent PWA, IFCA athletes. The first very well trained on the upwind tactics and light wind situations. The second ones are very fast in slalom and they tend to prefer strong wind.

The 2 groups are now melted in the class and they go along with each other surprisingly well.

One Event - Many Race Formats

To create an incredible event format, enjoyable for spectators, World Sailing has been insisting now for years on the readability of the event. Windsurfers have found a long time ago a solution to this problem with the Slalom course format. On the other hand, the traditional format of sailing events has always included an upwind-downwind racecourse. How to solve this dilemma? Simply having all the formats in one event. Considering the Campione del Garda typical wind conditions in the different time of the day, we planned to run the Course Race in the morning because the north wind is usually really strong. In the afternoon we were expecting the wind to come from the south and with light intensity and therefore the best was to run the Slalom.

If everything goes well you can use half-day to run the spectacular Marathon race where the competitors start all together using a fast powerboat as a rabbit.

On the last day, the plan is to run the medal race with different options according to wind speed. Or America’s Cup format or the Slalom.

Everything sounds really clear and simple but there is a problem with this planning: the wind duration.

In late October the Garda breeze is really good, especially with good weather and dry air. But the total wind duration is relatively short. You can expect to have north wind set in direction and intensity at 8.30-9.00 until 11.00. The south wind instead is usually coming around 13.30-14.00 and dying at 18.00, at sunset. You can count on 6 hours of wind but everything has to run around the clock.

The Slalom race format is made of a long series of heats. The heats are very short but they must be very precise in the starting procedure and in the mark positioning. Because the start is on reach, in order to compensate for the disadvantage of the sailor close to the pin, the Race Committee is continuously adjusting the angle of the line. You can imagine that it is very easy to have a problem with the start in shifty wind conditions encountering many general recalls.

Another tricky thing about the different courses is the fact that they connected with a certain wind intensity. Even the highly predictable Lake Garda can have lighter or stronger versions of the same wind. If in a traditional sailing event the Race Committee is only worrying about the wind limits. In this situation, they have to change the all course format between 10 and 12 knots potentially wasting 1 hour of work on a tight schedule.

The future of mark position is here.

All the time constraints and the precision requested could only be solved with technology. On Lake Garda, with 300 meters of depth, laying 1 mark can take from 15 min to half-hour. For ecological reasons, the lines we have to use are biodegradable causing potential failure and forcing re-positioning. Using standard marks with 500 meters of lines is not reasonable if you plan to have a first course in the morning and a second course in the afternoon and potentially even a third course in case the wind drops.

We decided to use the new robotic buoys: SMark. We got in contact with Valentina Venturi, one of the co-founders of WaterSportMark and we had her joining the team with 8 marks. During the regatta, we have been using advanced stage prototypes and thanks to the collaboration between the Univela team and Valentina it was possible to have amazingly precise courses in every condition. We are now testing together the next version of the buoys with the specific needs of Univela and Lake Garda in mind.

A very important aspect of using robotic marks is the fact that they are much safer in terms of the pandemic. If one person can lay 6 marks alone and apply micro-adjustments to the position using the smartphone the possibility to get in contact with dangerous viruses is dramatically reduced.

How to transform a sailing club in a safe environment

Back in March, we were all shocked by the Covid pandemic. We are in the Lombardy Region. The same region that had been on all the newspapers in the world because of the terrible number of casualties back in March and April. Campione del Garda is a village where about a hundred not so young people live and which boasts an enviable record during this pandemic period. The total number of infections in Campione del Garda was zero. In fact, no one got sick or resulted positive in the various tests carried out.

We have been very lucky but we haven’t taken anything for granted.

For the 2020 opening, we decided to adopt the extraordinary protection and sanitation protocol for the prevention of infectious diseases. Because the Univela Sailing Club is sharing many common spaces with the Univela Hostel and the Univela Beach Restaurant, we have added all the hygiene and safety measures to the HACCP standards according to the WHO directives for hotel structures and the guidelines of the national protocol "Safe Reception". On top of this, we have been following meticulously the Federazione Italiana Vela protocol.

What is the difference between a pre-covid regatta and nowadays?

Once your registration is done you will probably need an official invitation from the Italian Sailing Federation in order to cross the border (if the country you are is listed in a red zone). The same document could result extremely useful in case you need an actual VISA to enter Italy. In this phase the help of the Italian Sailing Federation and in particular of Massimo Ciampolini was very useful. It is a question of having the CONI offices communicate with each other with those of the Italian embassy with those of the Ministry of Health. An underestimated diplomatic job which, however, was decisive especially when some Interpol agents contacted us to guarantee the trip to an alleged suspect who was actually an athlete traveling to Campione del Garda.

First-time competitors and supporters are entering the club they must register and declare if they have done all the controls necessary to prevent the virus from spreading.

Events are completely closed to the public and everyone needs to wear a badge.

The entrance to the club has a thermal camera that checks everyone’s temperature and if you are wearing a facemask. The total number of people allowed inside the club was reduced to 72 people. At every corner was possible to clean your hands with sanitizing gel.

The easiest way to spend time in the club was to remain outside. The boat & board park was big enough to host everyone keeping the safe distance between competitors.

Once the regatta on the water was finished the only way to receive updated and communication was to read the online notice board or to read the Whatsapp group messages. Protests and redresses were possible only through the software Racing Rules of Sailing, able to manage all the one-to-one correspondence between the Jury and the competitors in order to set appointments for the eventual hearings.

In the evening around 20.00, the skipper meeting was held using Webex. In this way, it was easy for the class to start a video conference that was integrated into the Facebook page. Using Facebook as a method to communicate was granting everyone accesses to the comments and all the competitors were able to ask questions in real-time.

It was February 2020 when we got the news that we were appointed to organized the first-ever iQFOiL World Championship. A couple of weeks later a global pandemic arrived and everything was set on hold.

In the summer we monitored the situation and we kept organizing smaller events in Campione del Garda putting an incredible amount of energy and focus on the safety protocols. We then decided to keep running the event even if World Sailing decided that for 2020 it was not possible to assign the World title.

One week before the event the atmosphere was unreal. Everyone was thinking that we were cancelling last minute the regatta, but we didn’t. In a couple of days, the registered competitors doubled and people started to call in a rush to organize accommodation, visas, virus-test, motorboats parking.

It was a great success, no incidents, everybody extremely satisfied by the wind and club conditions.

It possible to organize events in difficult times. Sport is a metaphor for life and stopping regattas means much more than stopping a competition. Our duty as event organizers is to bring normality in the game adopting all the security protocols in order to prevent people to hurt themself. This was the case during the iQFOiL International Games.

Thank you all for making this event possible: 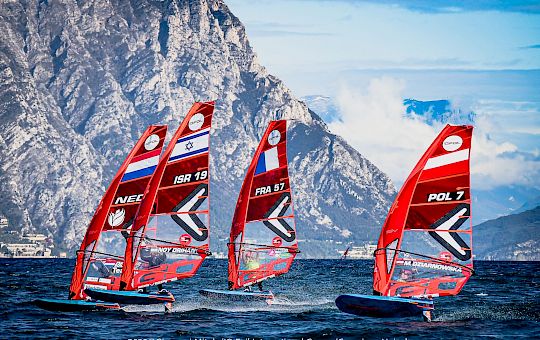 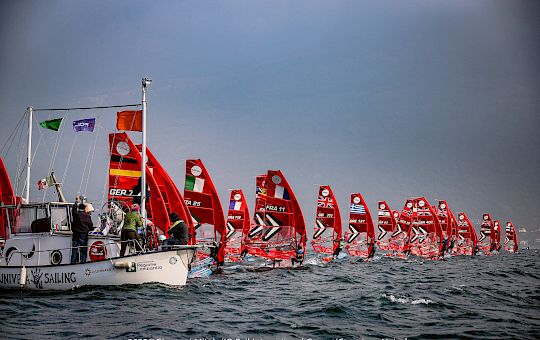 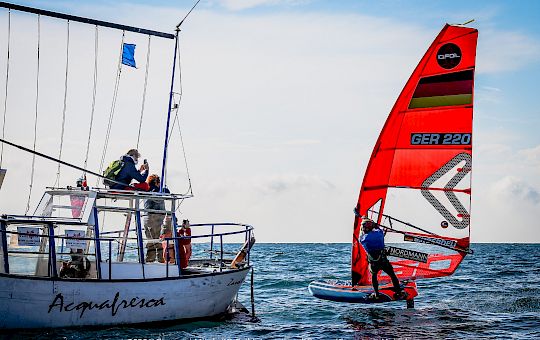 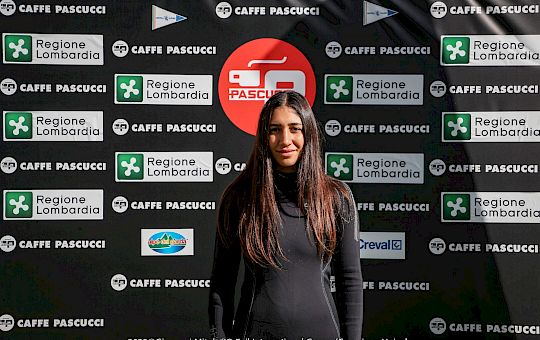 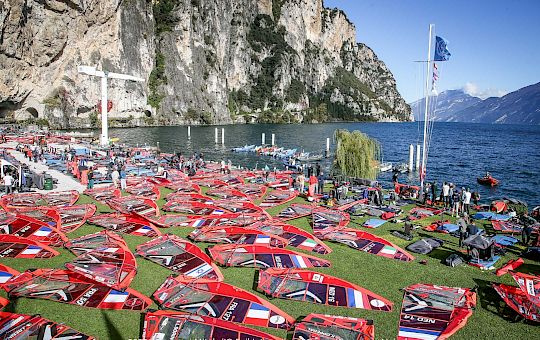 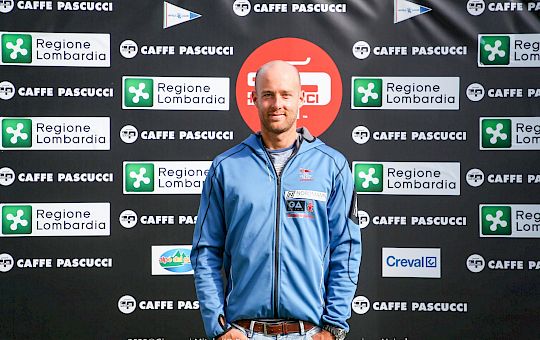 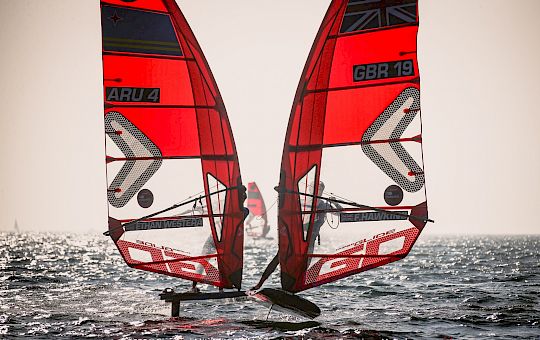 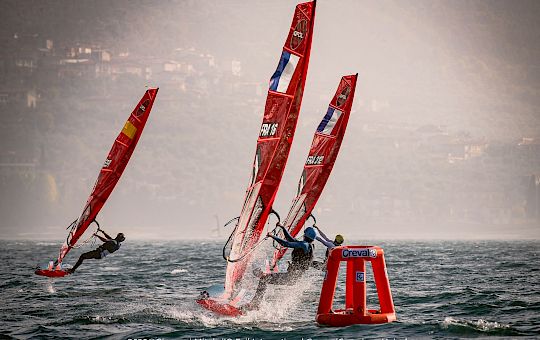 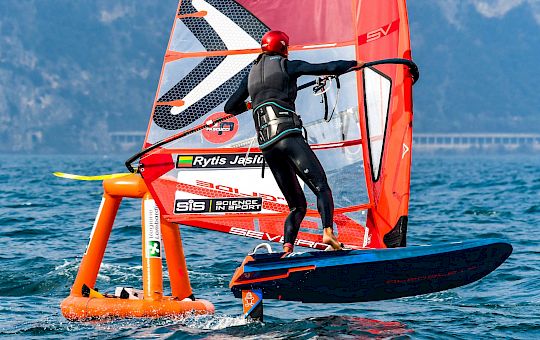