It was an early start to racing so that the 52 international riders could catch the best of the morning breeze on Italy’s most famous lake for high performance watersports. As the sun rose over Univela Campione, the venue for the wingfoilers on the western shore of Garda, the morning Peller breeze built in strength. Principal race officer Mirco Babbini sent the women’s fleet and three men’s qualifying groups out for some fast-turnaround slalom competition.

Yesterday’s master of the long distance, Francesco Cappuzzo (ITA), was less than satisfied with his performance. “I was leading the first race but I messed it up because I took the wrong mark. I gybed in the wrong place and my mind went a bit off after that and I struggled to come back [mentally].”

Although one of the bigger, more powerful riders in the pack, Cappuzzo says he’s normally very comfortable in the lighter breeze although admits he got his equipment choice wrong today. This is an open event, so anything goes - size of foil, size of wing, volume of board - whatever. While free choice sounds like a tempting form of freedom, it actually creates challenging dilemmas for the riders as they look out at the variable, patchy breeze on Garda.

“I wasn’t happy with my gear choice,” said Cappuzzo who has slipped from first to 7th in the overall rankings, “but after what happened yesterday [winning both races] I feel I can do it. In this kind of racing, it’s never over until it’s over and I hope for enough races to make a comeback.”

Mathis Ghio was leading his first heat until a crash on the final gybe. “I was not really focused on the job,” admitted the 19-year-old from Marseille. “I was thinking about my opponents just behind me and getting used to the race course format. I was not really sure where to make the gybe and when you’re thinking about something else other than your riding and your sailing, that’s when you crash. You have to be 100% focused on what you’re doing or things go wrong quickly.”

Ghio finished fourth in the first heat of Blue Group but no such mistakes in the next heats. Three straight bullets launch the Frenchman into the overall lead. Also pleased with his performance in Blue Group was 44-year-old Gunnar Biniasch (GER) who just wants to be the top master from the World Cup.

“I can’t hang on to these teenagers,” said Biniasch this morning before racing.

By the time he came ashore Biniasch had revised his opinion. “That was much better than I expected. I was finishing 4th or 5th in my heats, and only a couple of seconds behind Mathis. So I'm super stoked. I didn't think I would be able to keep up with those guys. I thought I was going to be more middle of my fleet. But I'm starting pretty good and I'm keeping pace. It's just maybe I’m playing it a bit too safe on the reaches. I’m not looking to push it though, I’m trying not to crash. If I can scrape into Gold Fleet on Saturday I’ll be happy.”

Paula Novotná (CZE) looked very comfortable and quick on the downwind slalom course and moved to the front of the women’s competition. Ceris Orane (FRA) moved up to third overall behind Ellie Aldridge (GBR) who drops off the top spot into second, not that surprising considering the full-time kitefoiler is new to the slalom game. “I’m learning all the time and I had no idea about what angles to sail downwind,” said Aldridge. “I was going for pressure, going for building the speed on a broad reach and then I looked around and everyone else was just going straight downwind and pumping. So I’m learning fast.”

Novotná and Orane were impressed by Aldridge’s start line judgement. “Ellie was fast off the line,” said Novotná. “I was holding back because I didn’t want a disqualification but I need to improve my timing.” Orane added: “Paula was super quick and she was faster than me but maybe I was quicker in the manoeuvres. But my starting was bad too, it’s a big area for improvement.”

Everyone is on such a steep learning curve, there’s a great sense of adventure and discovery at the Sabfoil Wingfoil Racing World Cup. Rafferty Read (GBR) is loving the cross-fertilisation of ideas about how to make a wingfoil go faster. “There’s so many different wings and foils and boards here, and it’s great to see what other people are using. There’s a lot to learn about gear and about techniques. This racing is telling me I need to work on my manoeuvres and short, sharp decision making and stuff like that. This is a great event to soak up knowledge.”

The men’s fleet continues to compete in three qualifying groups for the short-course racing until the end of Friday. Saturday is the finale, with the top riders going through to the gold fleet showdown. The women will continue to race in their own distinct short-course group. 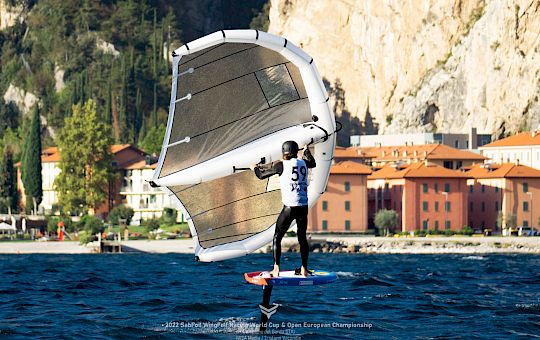 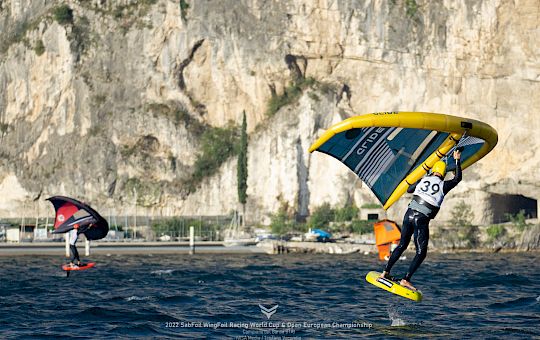 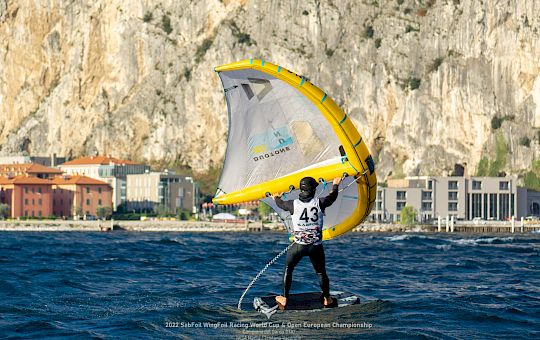 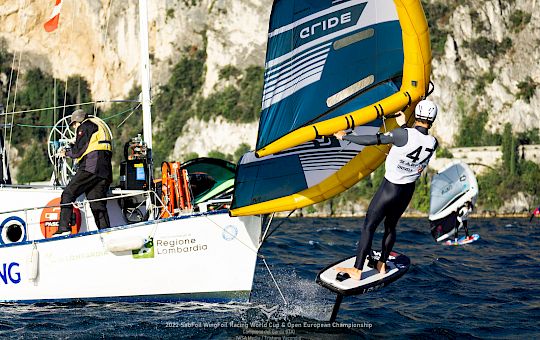 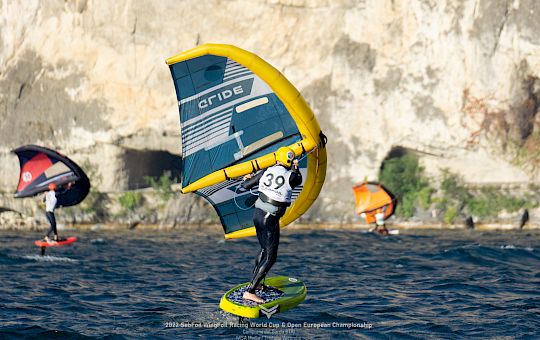 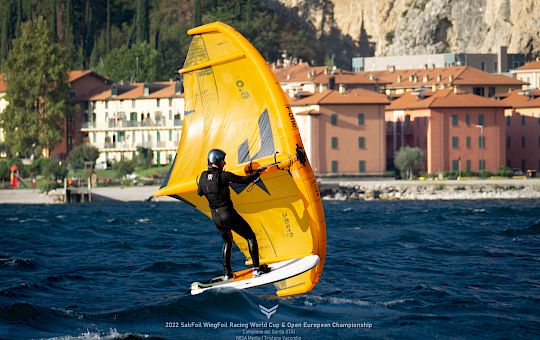 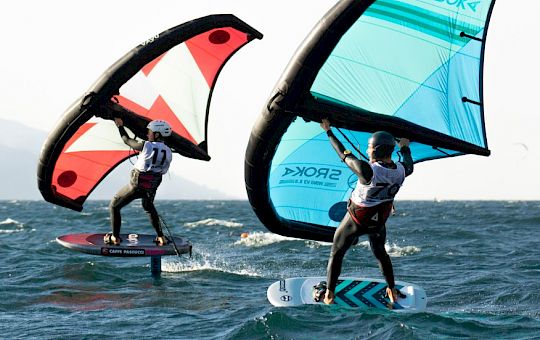 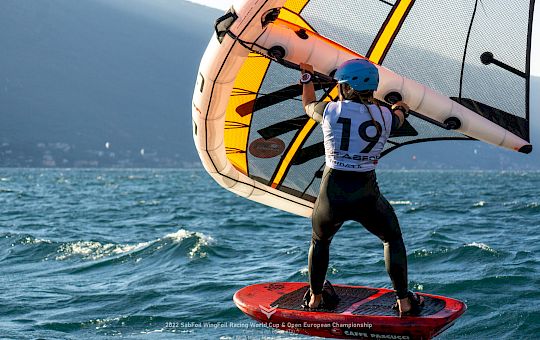 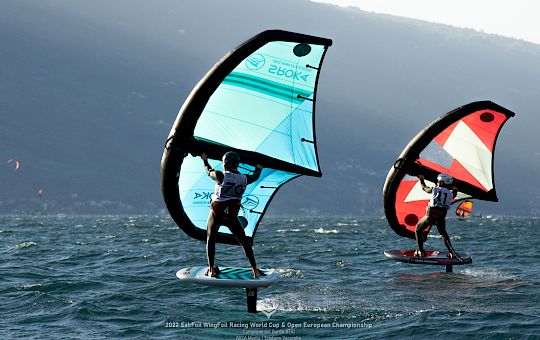 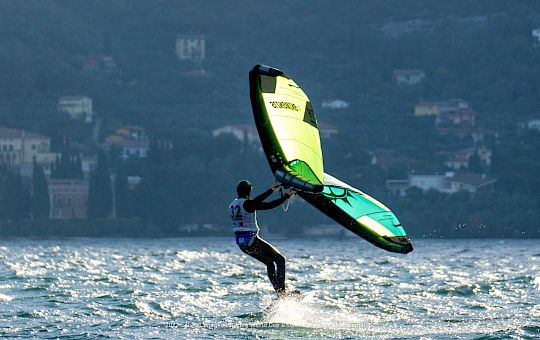